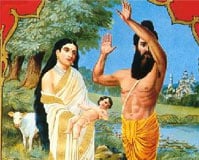 The two protagonists of the play are Dushyanta and Shakuntala. The king of Hastinapur, Dushyanta is a noble and kind ruler who is respected by everyone. Shakuntala is a beautiful maiden who is the daughter of Sage Vishwamitra and Apsara Menaka. Shakuntala has grown up in the hermitage of sage Kanva since she was disposed by her birth parents.

Dushyanta visits the hermitage of Kanva after a day of hunting, where he first gets a glance of the beautiful Shakuntala. He gets attracted to her from the very first moment when his eyes meet her beauty. After Shakuntala’s consent, both get married in the Gandharva mode of wedding. However soon after their marriage, Dushyanta leaves for his kingdom with a promise to return and take Shakuntala back with him. Enchanted by love, Shakuntala keeps on thinking about her husband the entire time, which affects her surrounding. The angry Sage Durvasa visits the hermitage and begs for water at Shakuntala’s door. However, she is so lost in the thoughts of her husband, that she fails to attend to the sage. Feeling insulted Durvasa incurs a curse on Shakuntala, which completely erases the memory of Shakuntala from Dushyanta’s head. However, later he modifies the curse on the request of Anasuya and Priyamvada. He tells them that the lost memory can be revived if Shakuntala shows an ornament which is a token of their love. The token is actually a ring that Dushyanta had gifted to Shakuntala.

After months of waiting for Dushyanta, Sage Kanva advises her to visit the court by herself. It is revealed that Shakuntala is heavily pregnant with Dushyanta’s child by then. However while on her way to the kingdom, Shakuntala loses her ring in a lake.

In the court, Dushyanta refuses to accept Shakuntala as his wife, as he completely loses his memory about their marriage, under the influence of the curse. He even makes several disparaging remarks about her character, which infuriates her. She is then escorted by the Apsaras into heaven, leaving everyone surprised. Eventually, after months, the ring is found by a fisherman. Dushyanta revives his memory back about Shakuntala when he sees that ring and breaks down in guilt. He becomes lovesick and curses himself for the adversity that he had caused.

Later, Dushyanta is reunited with his wife Shakuntala and their son Bharat in the hermitage of Marica. Dushyanta begs for the forgiveness of Shakuntala and asks her to return back with him. Shakuntala forgives him and they both move back to Hastinapur.

By critically analyzing, it can be said that Abhijnana Shakuntalam is one of the finest plays of Indian Literature. The theme of love and romance is very well evident in the play. Not just love, but other types of emotions are reflected as well in this play. Different bonds like friendship, love, fatherly love, etc are well established in this play.

It can be seen that all the eight types of Rasas are present in this play. ‘Shringar Rasa’ or love/erotic is more commonly apparent in the play. The carnal attraction of Dushyanta reflects the erotic form of love. Hasya Rasa is presented through the character of Madhavya who is a court jester or through the characters of Shakuntala’s friends. Bhayanaka Rasa is not present strongly like the others. In the court when Shakuntala and Dushyanta engage in an argument about their marriage, it creates an environment of horror and fear among the people present there. This can be related to the Bhayanaka Rasa, which means fear. Viram Rasa is presented through the character of Dushyanta, who is a brave king. He fights bravely with the demons, and represents valour or ‘Veerta’. Advuta Rasa signifies Wonder. This Rasa is depicted through scenes like the cursing of Durvasa or when Dushyanta agrees to keep Shakuntala at the palace till the birth of the baby. These incidents cause a s ituation of wonder or surprise among the readers. Bibhistsa Rasa is found in scenes like when Dushyanta refuses to accept Shakuntala as his wife and in return throws several immoral allegaations. This builds up an emotional disgust among the readers. Karuna Rasa is reflected through the act of Dushyanta’s refusal to accept Shakuntala as his wife, which builds up sadness among the readers. Rudra Rasa is expressed through Durvasa, who reflects anger. In this way, all the eight Rasas are perfectly presented in the play.

Even though the characters of this play are borrowed from Mahabharata, the characters of Anusuya and Priyamvada are newly added in Abhijnana Shakuntalam by Kalidasa. Through this play, the societal status of women is also shown accurately. Women have been subject of prejudice since that age, and this has been going on even in the present age. Dushyanta’s ill-treatment towards Shakuntala and the way he tries to put a strain on her character manifest a precise picture of patriarchy and chauvinism.

9 thoughts on “Critical Analysis of the play Abhijnana Shakuntalam”