Home » Blog » Role of Shakuntala in the play Abhijnana Sakuntalam 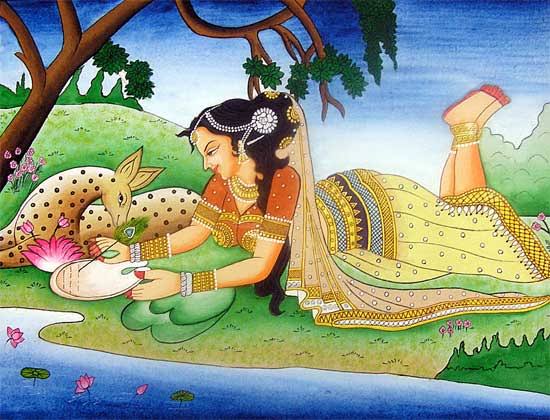 Shakuntala is the protagonist of Kalidasa’s most prominent play ‘AbhijnanaSakuntalam’. She was born to a beautiful Apsara named Menaka and the great sage Vishwamitra. However, soon after birth she was handed over to sage Kanva, where she grew up amidst the beautiful nature.

She lives her life as an ascetic in Kanva’s hermitage, where she tends to the sacred trees and loves them like sisters. Shakuntala, despite living in the forest, always looks charming and beautiful, which enchants King Duhsanta’s senses the very first time he sees her.
Through the character of Shakuntala, we get a glance at the role of women in the society which is prevalent in a similar way even today. Shakuntala is a pillar of strength as she faces every disgrace coming in her way bravely. After marrying Shakuntala in the forest, king Duhsanta leaves back for his kingdom to attend his stately affairs. During this period of his absence, Shakuntala loses her interest in the daily activities and remains distracted due to her love for the King. The angry sage Durvasa incurs a curse on her which makes Duhsanta forget everything about her. However, he also modifies the curse saying that the king would retain his memory back if Shakuntala provides him an ornament which is a token of their love.
Shakuntala is pregnant with Duhsanta’s child. With the passage of time, there is no news from Duhsanta. Sage Kanva then suggests her to visit the king’s palace by herself instead of waiting for him in the forest. When she reaches the palace, Duhsanta clearly refuses to recognize her as his wife, under the influence of Durvasa’s curse. When Shakuntala searches for her ring to show it to the king, she realizes that she has lost it on the way.
Duhsanta vehemently abuses Shakuntala and insults her character. Through this we can see how a woman is always subjected to a doubtful character by the patriarchy. When the high priest suggests Shakuntala to stay in the palace until the child is born, she clearly refuses the offer and prays to the Gods to take her back. Through this act Shakuntala plays the role of a dignified woman who knows her worth and doesn’t let anyone to pity her.
However later the ring which is a token of their love is found inside the belly of a fish by a fisherman. After seeing the ring, Duhsanta acquires his memory back and breaks down in immense guilt and shame.

Later Duhsanta meets his son Bharat playing with a lion cub in the hermitage of Marica. He also meets his beloved wife Shakuntala there, and breaks down. He begs for her forgiveness and weeps in guilt for his deed. Shakuntala forgives Duhsanta of everything he did and returns back with him to his palace.
Even if Shakuntala suffered a lot in Duhsanta’s palace, she still manages to forgive him. Through this Shakuntala plays the role of a strong, love driven woman. Throughout the entire story we witnessed the immense love of Shakuntala for her husband. Yet she succeeded in managing her self respect when she was terribly insulted by her husband.  Her heart is noble and her love is pure. Shakuntala’s character can be termed as unfortunate as she goes through a pathetic phase due to love and heartbreak. She portrays the role of common women in the society who are often crushed by the patriarchy.
Shakuntala’s life took a pathetic turn primarily because of three men. Her own biological father refused to own her in fear of mortification in the society. Again, sage Durvasa created trouble in her life by incuring a curse out of anger. Her husband Duhsanta insulted her in front of the entire court by refusing to recognize her. Therefore we can see how a woman’s life is often dominated by the men around her.